skip to main | skip to sidebar

Okay, so I added a countdown to my iGoogle page just so I didn't have to keep calculating, and check it out! It's even giving me it in minutes and seconds!

Things are going really good. I just wanted to update that.

We are slowly planning our Eurotrip 2011. You guys didn't think we'd actually be doing it, did you? Well, guess what!!? We are! We are planning our trip through eurotrip.com, and it seems like a really cool website. I'll be sure to share my trip with everyone once we've got a lot of it planned. Which will probably be next year. LOL. We are thinking we'll head to London first, and then we have no clue. We have decided what countries we'll travel to though: UK, Ireland, France, Spain, Italy, Germany, Switzerland,the Netherlands (just Amsterdam) and possibly Belgium. Wouldn't it be so cool to fly to Morocco for a couple days just to hang though? Oh well, we'll have time for that later in life (but I could add another tattoo because of that, eh?) Carpe Diem, baby.

Well, other than that we've started a targeted emergency fund for our cats, becuase they've been pretty expensive lately. We took our extra $200 we were putting towards the car and using it to build that savings up, so once we're done with the $500 we will put it back towards the car. That will be about 4 paychecks.

As of right now, I still have my job for next year. Which, I'm really looking forward to. I have heard that it takes about 3 years for teachers to really love their jobs, so I'm thinking that something's got to give because I'm really happy and love what I do! The kids are great, the staff is great, the district is great! Everything is really wonderful. And the program is, thus far, very successful. I guess I should knock on wood though, because everything always messes up for some reason!
Posted by Kerry at 5:10 PM No comments:

Oh man, we have been spending some cash money of late! Both of our cats have been sick - Bubbles even had to have a $90.00 medication from Rite Aid on Friday. Oh geez. We've been definitely dipping into our Emergency Fund lately and are down to $2,100.


Our new plan is to divert paying extra money on our car every month and build our fund back up, and also to start saving a targeted emergency fund for my cats of $500. As soon as we have that, we'll put an extra $100 towards our car again.


This does bring up a good point though, we've been really bad at managing where our money is going to right now. Thankfully, every month or 6 weeks we have a budget meeting where we look at our spending habits, and rework our budget according to what's going on. It even found us an extra $100 the first time we did it, it was great! I think all couples should do it, young and old, new couples and those married for 60 years. It's important.

Couple Money is Giving Away a Netbook!

Couple Money is giving away a Netbook if you:

All you have to do to get a chance to win is simply subscribe to Couple Money either withemail updates or through RSS and follow me on twitter (if you win, I’ll contact you by Twitter DM).
If you can receive up to 3 extra entries by:
This would be a great way to save some money and not dip into the Emergency Fund!
Posted by Kerry at 9:11 AM No comments:

Emergency Fund Comes to the Rescue! 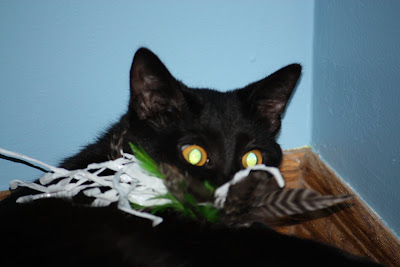 While playing with our new addition, Jacob, he ingested a catnip toy, mesh with the catnip inside (kicking self in ass).

So, it's a foreign object, and cats have super sensitive stomachs. Their intestines can not handle something that big, either. I'm still in shock that he ate it free and clear. Really, Jake? Really?

Bigger deal than I thought. Like, call Emergency Vet Clinic and they tell me to bring him in right away because it could cause a blockage in his intestine if it passes through his stomach. Oh shit.

Within 25 minutes of the ingestion, we are at the clinic and they are wanting to take X-Rays ($$), give vomit-inducing meds ($$) and see doctor ($$). Well, after X-Rays we can see what appears to be something at the end of the stomach, beginning of the intestine. Oh shit times three. If we can't get him to vomit it up, he has to have surgery to have it removed (BIG $$$$$).

We get home, he's totally acting fine. I'm freaking out. But the point is that I'm not freaking out because we have to pay for surgery, I'm freaking out for his LIFE. It was nice that I didn't have to worry about money. Really nice. Thank GOD for our Emergency Fund. Instead of being in credit card debt for saving our cat's life and paying on it every month for a couple months, we just dipped into our EF and will pay it back up over the next few paychecks.

So, what happened to our Jakey Poo? Well, one minute he was lying under the covers, the next second he was puking his guts out all over our carpet. And guess what, it came out! Given, he's still not out of the woods because we think his esophagus might have been scraped, so we're taking him to the vet tomorrow if he pukes again (He's only vomited twice, so we'll see), but still, no debt from this little mishap. Only shame on Mommy for having a toy that small.

He just came out from under the bed so I'm going to spend some quality time with him :)
Posted by Kerry at 9:15 PM 1 comment: 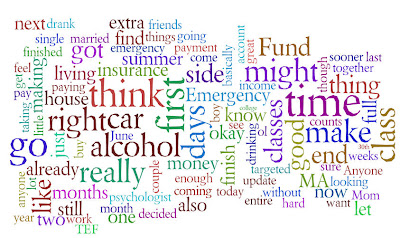 Well, it's officially been 2 months, and let's see where I'm at:

Our marriage is improving every single day. We're not two singles living together, we're finally a couple. A married couple! It's like a full-time job - why didn't anyone tell me this before!?! I love him to death - and that's what counts!

I paid our car insurance in full for 6 months, next payment: August. Next payment for the 'Bu - March 14th (I think - right Madre?)

I am on my second class of my MA program. As of July 30th (if all goes as planned) I'll have 6 classes finished and will finish my last 2 next spring. I got a 4.0 in my first class (go me!)

I will finish my extra endorsement for the K-12 Spanish in June.

We will vacation to Boston this summer, and that just might be it. We also might go on a cruise over Christmas. But, we are planning to go to Europe for 4 - 6 weeks next summer and it is going to be AWESOME! So, that will make up for it... Totally, totally make up for it! Carpe diem, right?

And last but not least, the only thing that I didn't do for a year: I gave up on my sobreity. :( Sorry Mom. We only drink when we go out, and I made it entire month without drinking, which is an accomplishment in itself! I haven't drank in 2 weeks because we haven't gone out, so I feel okay with this deal and am okay that I "failed". Although I'm not making excuses, I think I learned a lot about the experience though, and feel that drinking when we're out and not having alcohol in the house is a great, great thing - especially when we have kids!
Posted by Kerry at 9:30 PM 1 comment:

Wowza! I can't believe I've not drank anything for 19 days (2 days before New Years). Unbelievable!

Do you think that O'Doul's counts as alcohol? I like hanging out with friends and all but EVERYONE drinks, so if I'm not looking for alcohol but I am looking to 'play along' and still be DD, do you think this is an okay alternative?

We still have $700 in our Emergency Fund and guess what... We'll be paying the car insurance in full for the first time EVER! Woo hoo!

We actually looked at a house today but then we got into a deep discussion on where we'll be in 3 years, and we have decided that we don't know so we might not want to buy a house right now. So, basically we'll be living with good ol' Mom until then (but we've got a good situation right now, so there's absolutely no complaining!)

Yes, I like long walks on the beach and my mother-in-law's cooking, and yes I have a BA and a full-time job that I love.
But do you think I finish anything else that I start? Well, in my mother's own words she puts it in layman's terms, "Kerry, you don't finish anything you start. You're just like your father." Now, I love my Dad, I really really really do! (So Dad, if you're reading this, I really do love you) but come on, he has delved into many a thing, including but not limited to: his private pilot license which he doesn't keep current, photography, numerous business ventures (the latest is only alive because my Mom runs it), scuba-diving with rescue training he never finished, and finally and most importantly: getting his journeyman's card. He's a fabulous and hard worker, but he just doesn't finish anything he starts. We've lived in our house he built for 15 years, and there are still things he hasn't finished.
I've inherited a lot of great qualities all around, but that is one I am putting a stop to this instant.
Over the next year, I will document my New Year's resolutions and how I am keeping them, what I am doing to progress and finish projects, and ideas, tips and tricks to get the job DONE. Completed. Finito. Terminado.
So strap yourself in - it's going to get crazy!